Merging back to the main branch can create virtual dependencies1 between teams working on the same software component, and stop your delivery pipeline. If you keep walking on each other’s feet, atomic change flow can help you. 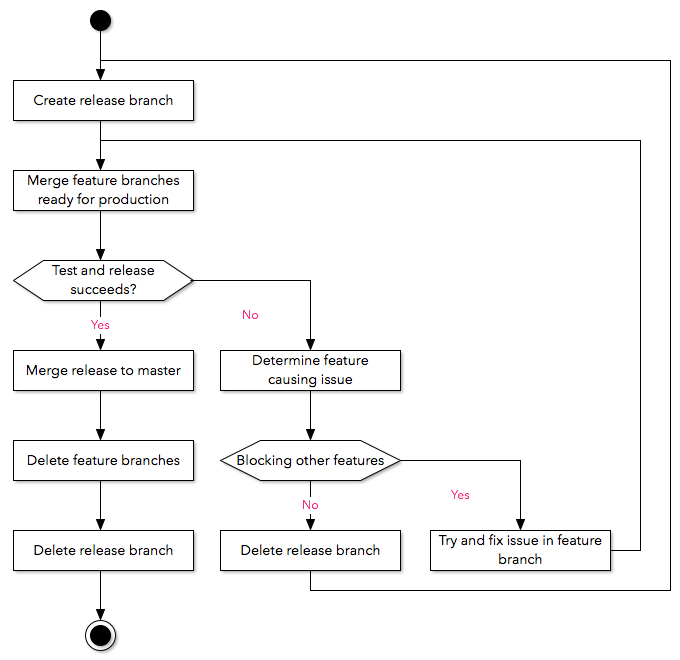 The main difference with git-flow is that we do not deliver from master but rather from the release branch. The point being that we maintain atomicity of changes in the feature branches until they’re deployed, making roll backs easier.

There are lots of solutions when it comes to source control and branching strategy. But there are few that I’ve found very flexible and adapted to daily releases. Our needs were the following:

The closest thing corresponding to our needs would be git flow. But not quite. It is much more complex, and at the same time does not allow you as much flexibility.

One could also argue for trunk-based development + feature toggles. Although it’s a fairly flexible solution, I don’t think feature toggles apply on all cases. While I genuinely recognize the value for specific release management perspectives, I don’t think they are a one-size-fits-all kind of solution. My main concern with these is that

So we started from that and came up with the simplest, most flexible thing that you could actually do.

In short, the whole concept is to keep atomicity of our change requests as far as we can in our source control. It’s a bit like ingredients in a cake. As long as they’re separate, you can do whatever you want to each of them individually (wipe, heat, shake, etc.). But once they’re mixed, you’re forced to do the operations to the whole, and it might prove more complex. And if one of the ingredients is actually stale, then the whole is stale.

Applied to branching workflow, we basically reverse the usual dependencies of master/release/feature branches: 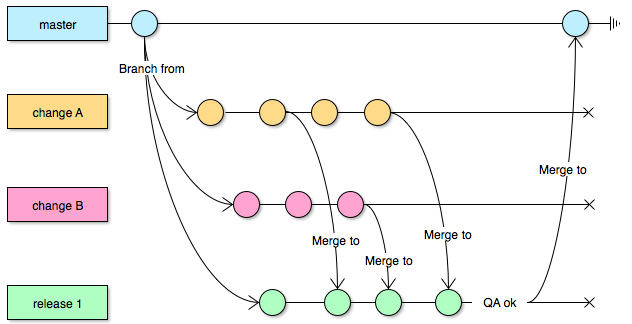 Now to make that work there’s a very limited set of rules to follow:

For people familiar with GitFlow, it almost looks like it, but with an intermediary release branch, which is the one getting deployed to test environment(s).

The beauty of that model is that it’s very natural, and straight forward to understand. Its advantages are severalfold:

There are obvious objections that first made us cautious about such a transition, but when you really try to follow the train of thought, they’re actually all very simply overcame:

Either way these conflicts are, from experience, very straight forward to resolve if you understand what you’re doing. 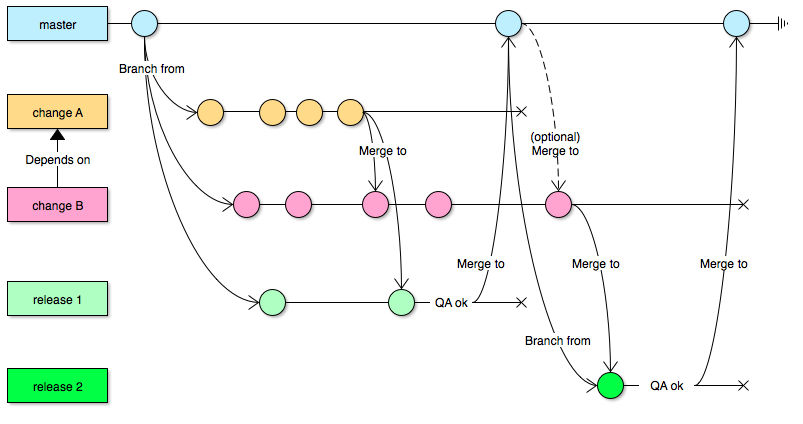 What strikes me the most with that model is its overall universality. There must be cases where it does not work, but on top of my head I can’t seem to find any.